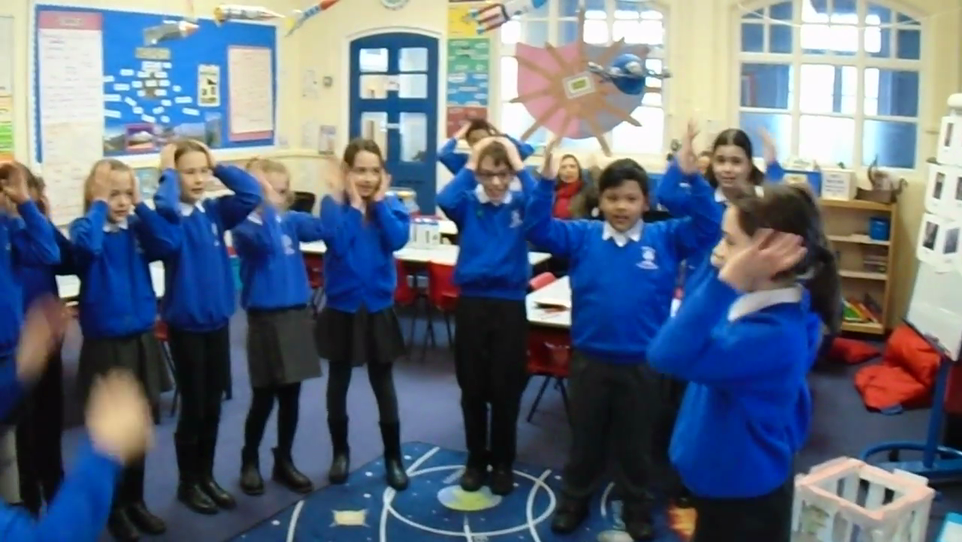 Year 6 learning to tell the time in French

Children at Northside really enjoy learning French; I am often greeted by children in the corridors saying ‘Bonjour’ or ‘Ca va?’, which is joyful!  Years 4, 5 and 6 all have French calendars in their classrooms and different monitors are chosen each week to ask questions to the class to respond: ‘Quelle est la date aujourd’hui?’ and in years 5 and 6, they add, ‘Quel temps fait-t-il?’ It is so beneficial when the calendars are done every day, to help the children remember key language.

Year 6 have already achieved great work this term, having read their first comic in French, Les Deux Grenouilles (The Two Frogs).  Using the comic as a guide, they all wrote their own versions, changing the animals and descriptions, using correct French gender and plural adjectives.  Some of these are on display outside are staff room.  Year 6 also read the full version of the Hungry Caterpillar in French and then wrote their own shorter versions, some with much great humour.  As they were so good, we are sending them to the pupils’ new French pen pals at Ecole Edouard Herriot in Morangis, south of Paris. They have also written their pen pals introduction letters about themselves.   We have just started a new topic all about clothes.

Year 5 has been working hard on revising and extending their knowledge of greeting people, introducing themselves and other people and describing their feelings.  We have been working on being able to use feminine and masculine versions of different feeling words. Ask your children to tell you how they feel in French!  They also learnt the French pronouns and conjugated the verb ‘Avoir’ (To have).  They also have new French pen pals from Ecole Edouard Harriot; they started writing letters this week, using the language we have been working on so far this term.

Year 4 are learning French with Mademoiselle Price, who is really enjoying teaching it to the class, an avid French speaker herself.  They have been learning how to say they have brothers and sisters or if they are an only child, describe where they live, how to say different places around town, and they will be starting to learn directions this week.

Year 3 are having French lessons with Monsieur Tibbs who says the class are keenly taking on the new language skills. They started by looking at where people speak French in the world, and discussing cultural aspects of France such as food, landmarks and flag.  They have been learning basic greetings, how to ask and say their name, ask and respond to ‘how are you?’ and are starting to learn the colours in French.

In other French news…. The KS2 pupils at Northside have been doing super learning this year, all making good if not outstanding progress.  All KS2 classes have different monitors each week to update their French Calendars dates and weather, asking the class the questions in French, during register time.  The different year groups have been covering the following:-

Year 6 read The Hungry Caterpillar and wrote their own stories as well as learning all about clothes we wear for different occasions. This term we have been talking about keeping healthy, from the foods we eat to activities we do, all in French!

Year 5 have learnt about the Olympic Games and can say what sports they do; they also created colourful monsters and described their bodies using correct French grammar.  Years 5 and 6 have also enjoyed corresponding with their penpals in France.

Year 4 had brilliant fun last term having their French Café, impressing me so much by all speaking in French to ask each other for food and drinks and this term they have become weather forecasters.

Year 3 pupils are doing so well already at having sustained conversations to introduce themselves to each other, we have read and explored a French version of Little Red Riding Hood, and they can sing Head, Shoulders, Knees and Toes in French!

At Northside, children in KS2 are taught French by specialist teacher each week for 45 minutes and have been progressing brilliantly already this term.  During lessons, we cover speaking, listening, reading and writing skills, which are assessed throughout the year.  We focus on different French phonic sounds, how to read and pronounce them.  We learn the language through talking in partners, speaking in front of the class, learning songs, reading and writing stories, watching videos, playing games, using puppets and using the French displays in the classroom.

Read the 2018/19 French curriculum map to see what topics we are covering throughout each year group.

At home, encourage your children to practice their French language skills online at www.languageangels.com by clicking Play Games and using the Northside login:-

All the children made French Christmas cards in the Autumn Term.  Years 4, 5 and 6 letters have been sent to their pen pals in our twin schools in France and Year 3 are taking them home to family.  The children are looking forward to receiving cards from their French friends and Years 5 and 6 will continue to write and receive letters throughout the year.

Last year we had a French Day which involved the whole school from Reception to Year 6; students came to help out from St Michaels as well as our French speaking Northside parents.  We plan to do this again in the summer term, so if this is something you would like to help out with, please contact the school office.

Year 3 having conversations in French in front of the class - they were amazing! 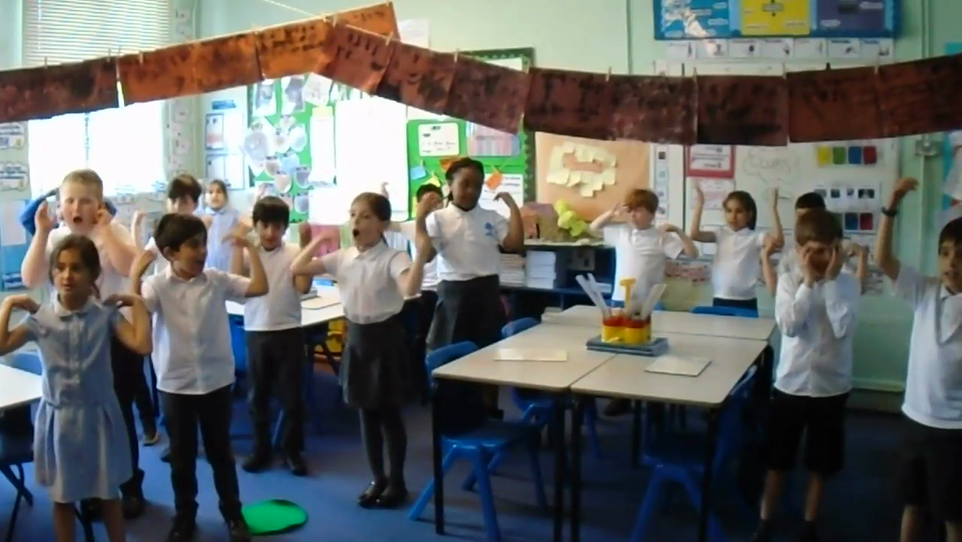 Year 5 structuring sentences about their family

Year 6 story starter of their alternative 'The Hungry Caterpillar'