We joined other year 6 pupils across Barnet to be part of an exciting music project - a virtual collaboration of pupils leaving primary school.  And here is the finished video!!! You look and sound amazing year 6 - I'm so proud of you! Enjoy!

Year 2 doing a vocal warm up 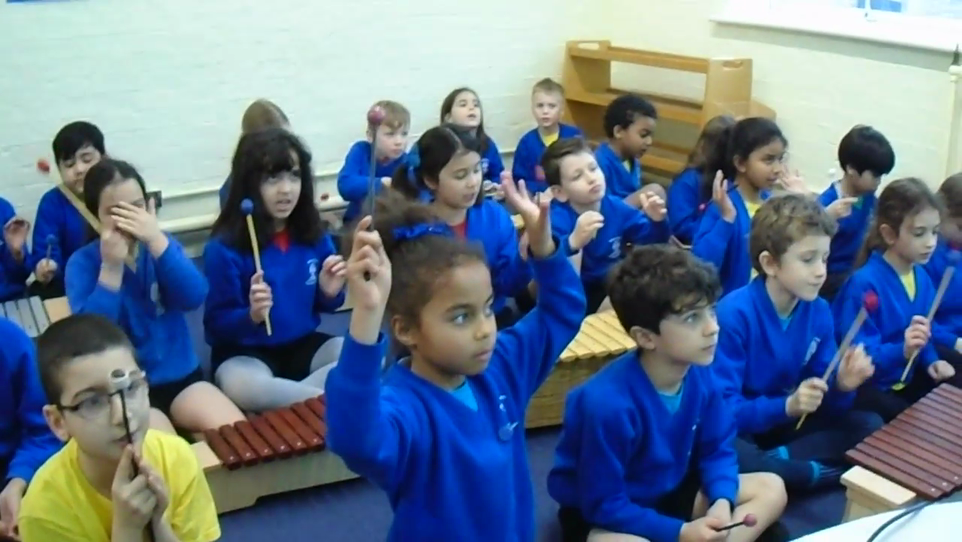 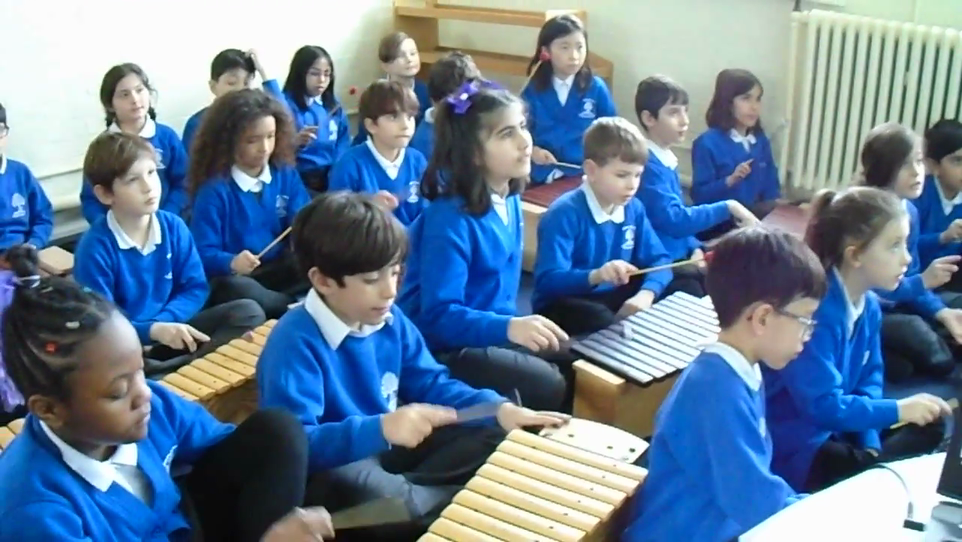 Tabitha in Year 4 playing March of the Golden Guards 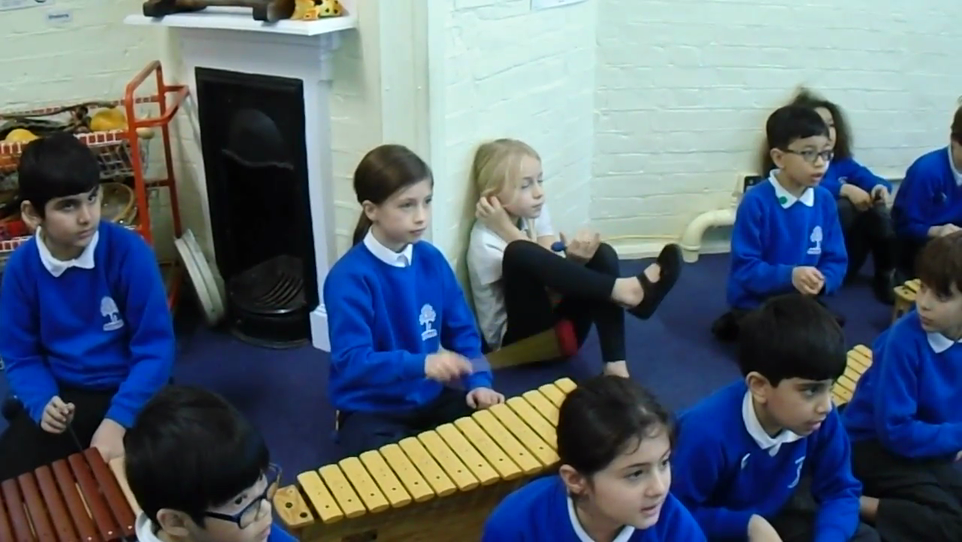 Years 5 and 6 playing The 12 Days of Christmas 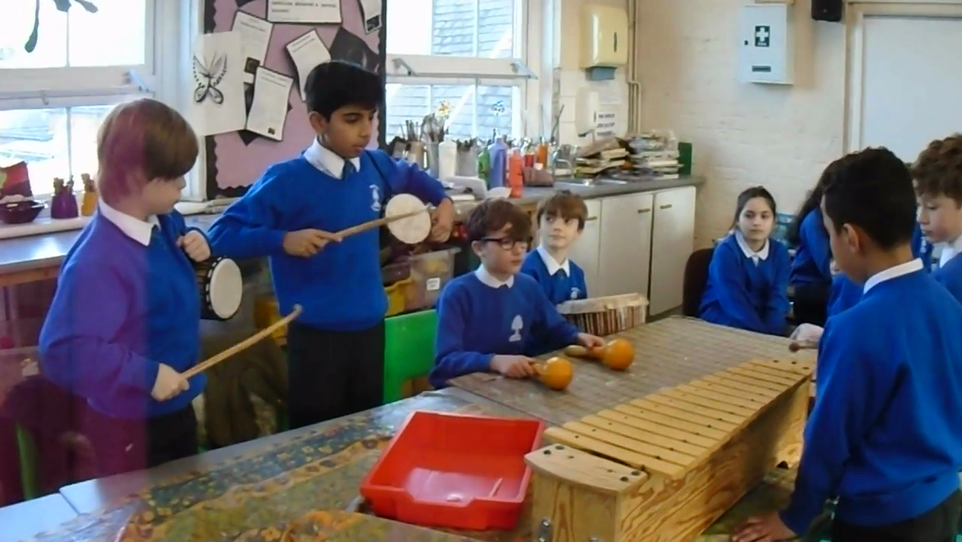 I have been thoroughly enjoying teaching your children their music lessons this term - they have so much rhythm, great musical talent an enthusiasm.

Music Lessons - We have been using a fantastic new online music teaching scheme called Charanga, which covers an incredibly wide range of music genres through the ages.  In year 1 we covered Hip Hop style, in year 3 we’ve been singing an R&B style song and in year 4 we were working on ABBA songs and now Gospel, with Bill Withers Lean on Me.  In year 5 we studied Rock last half term with Bon Jovi’s Living on A Prayer and this term is Ballads with Make You Feel My Love. Year 6 focused on Happy songs to start the year, with Pharrell Williams iconic song, and we have moved on to study Carole King’s amazing body of work.  We listen to different songs in each style, deciphering what instruments are playing, discussing the dynamics, tempo, structure and texture.  We find the pulse, play rhythm games, do vocal warm ups, work on pitch and singing as well as playing glockenspiels, improvising and composing.  Years 1 and 2 are doing a wonderful job of learning their songs for the Christmas Production and I know it’s going to be brilliant after year 2 stormed the Infant Music Festival in October, singing songs from all around the world as well as show casing an acapella version of the O’Jays Love Train.

Assemblies - we have been listening to different styles of music, from classical pieces by Handel and Beethoven to film music from Harry Potter by John Williams, as well as Elvis Presely, the Beatles and Ziggy Marley.  We have also started having children show off their musical talents in singing assembly, with Arthur playing piano and Maia singing and performing on the Djembe.  We will be having another Northside Music Festival on 26 March so auditions will start for that next term.

Music Tuition - BEAT (Barnet Education Trust) have provided some great teaching this term, in particular years 3 and 4 also shone this term having Djembe lessons with Anuj, a specialist teacher from BEAT.  Following the great teaching, we are starting a Djembe club next term.  We will also have a Singing Group starting for years 1-3, which will be bursting with joy with 17 Northsiders signed up! We have more pupils taking up piano lessons as well as singing, and we have a new guitar teacher starting too.

Choir - The Northside choir have been very busy learning Christmas songs, including harmonies led by the pupils themselves, and musical accompaniment.  They will show off their talents this week singing on the High Street, at the North London Hospice and the Winter Fair, and later this month at the Northside Christmas Service.

I was hugely proud of the choir this week for singing so well and being a great team! Half of the choir sang Christmas songs outside Sainsburys to raise some money for the school. It was a beautiful sunny day and such a lovely vibe, with passers by stopping to listen with big smiles across their faces, and so many kind people putting money in our buckets.  The other half of the choir brought a wonderful festive cheer to some of the residents and out-patients at the North London Hospice, who have already asked us to return again!  It was really lovely to show off the brilliant singing, harmony work (led by Tereza, Momo, Sofia and Adarsh) and musical accompaniment (tambourines and glockenspiels).  Thank you so much to all the super parent volunteers who came with us too. 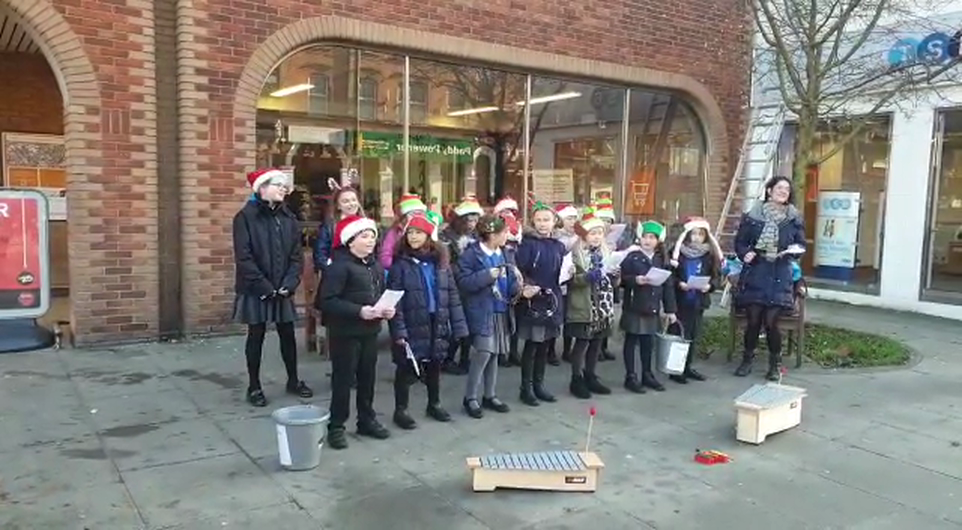 We had the pleasure of taking year 2 to the Infant Music Festival at Manorside Primary.  The children sang all the lovely songs we have been learning from around the world with 180 other Barnet school pupils, including Simama Kaa and Tinga Layo, singing in rounds, with sound effects and with body percussion.  Our children also performed their song, Love Train, incredibly well with actions and props; we had lots of compliments from other schools. A huge well done to all of year 2!!

Huge congratulations to all of the children who took part in the Northside Music Festival on Wednesday. There is such a huge amount of musical talent in our school and I feel so proud of each and every pupil who performed - for the effort they put in to practicing, their courage to perform to a fully packed school hall, and of course their musicianship. I felt such joy and awe listening to the music, and by the massive applause and cheers after each performance, I know everyone at Northside felt the same. Well done Northside - we are a school full of brilliant music - and it will keep getting better!
Music and French Leader
Mrs Goldhill

It has been a busy time for music.  In March, the Northside Primary Choir went to Voice in a Million at the Wembley Arena and had an unforgettable experience, singing many popular songs, and dancing with 5,000 other school pupils in a brilliantly produced show.  In June, class 5B performed superbly at the Barnet Schools Music Festival, joining many other schools to sing songs in harmony, as well as singing their own version of Rather B.

The children who have had piano and guitar lessons in school over the last two terms have made great progress already.  Some of them will perform at the Northside Music Festival, alongside the wonderful talents of children learning instruments outside school.  We will hear songs played on the piano, guitar, cello, violin, saxophone and some solo singers too.  The lovely Northside Choir will also perform at the Festival, after their debut at the Summer Fair on Friday.

We are delighted that piano and guitar lessons are continuing next year, with the addition of singing lessons; I am looking forward to hearing their progress.  Finally, I am very excited that I will be teaching your children their class music lessons next year.

Northside pupils have weekly music lessons with our specialist music teacher, using their voices and musical instruments to perform, explore and compose.  She currently runs an after school music club for KS1 on Tuesdays, and choir for KS1/KS2 on Thursdays.  In the Summer Term, these will both be Music Club (singing and playing musical instruments), KS1 on Tuesdays and KS2 on Thursdays.

As well as leading weekly singing assemblies, I have been running a lunch time choir for KS2 on Wednesdays since November.   Just before Christmas we visited Kenwood Care Home to sing carols to the residents which brought much Christmas cheer.  In March we are going to Voice In A Million at Wembley Arena, which is a mass choral event with thousands of school children.  In the Summer term, we will serenade shoppers on the High Street.  Year 5 will have music lessons after half term, and 5P will be attending the Barnet Music Festival in June.

Since January, some thirty Northside pupils have been enjoying one-to-one piano and acoustic guitar lessons with specialist teachers from BEAT (Barnet Education Trust).  A renewal letter will go out to those already having lessons to book for the Summer term.  For those who would like to start guitar or piano lessons in the Summer, you will be able to download a booking form from our website soon and there will also be forms in our office.  Forms and payment need to be in by 1st March to confirm places. 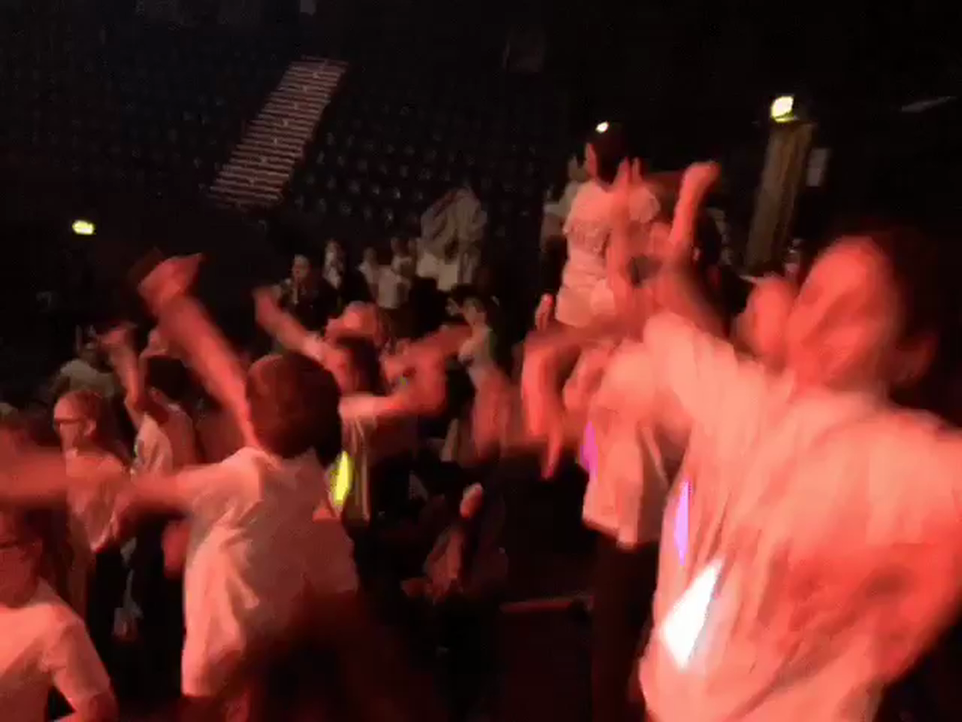 The Choir in Action. 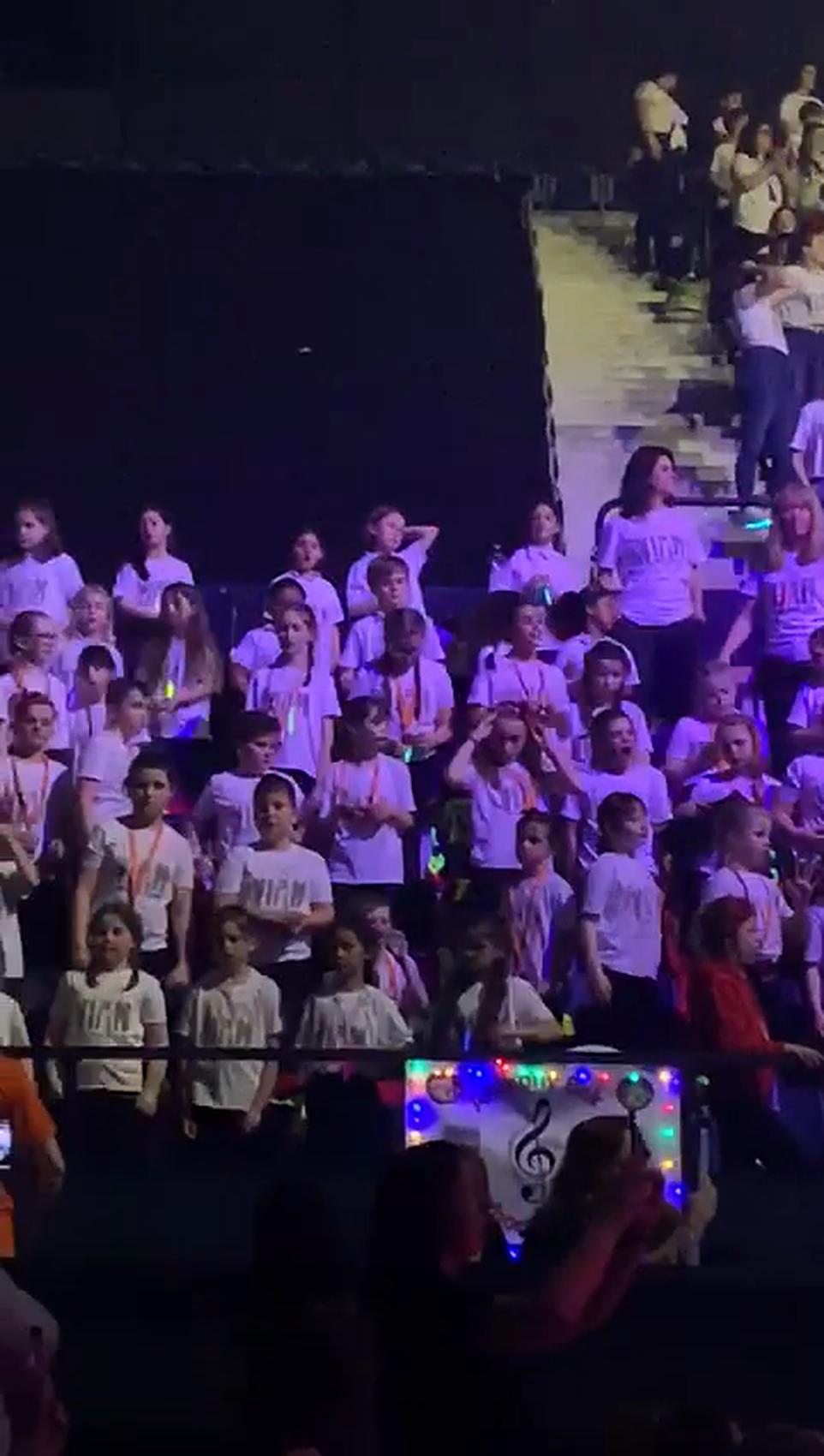 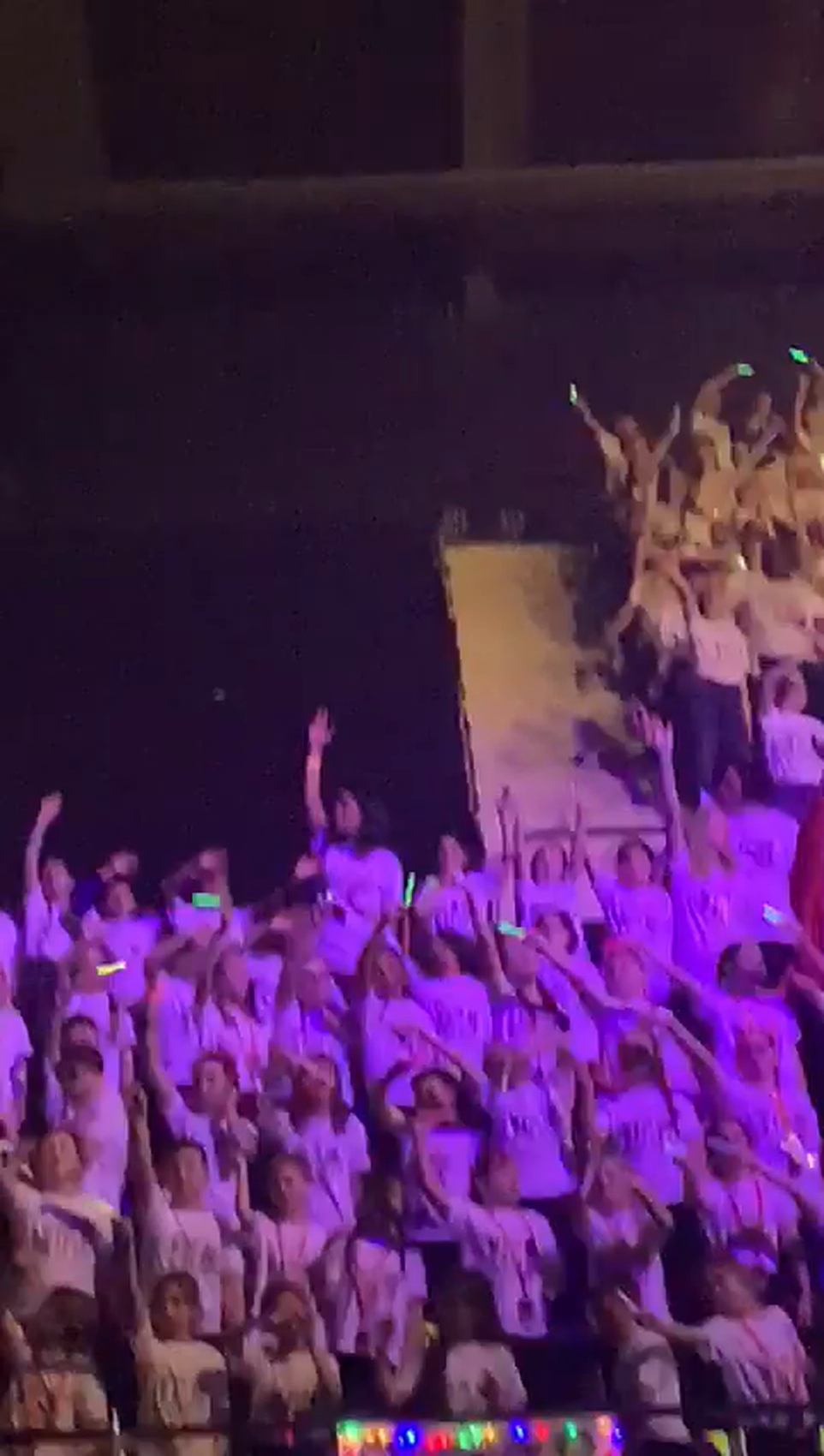